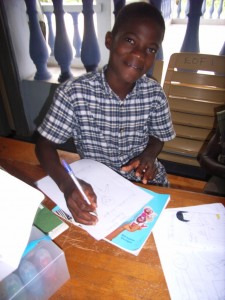 My name is Emmanuel. I was born to a family of six [6].
Unfortunately for me, I am the only boy with other three [3] girls and my parents. Am the second born of my family. Am from Shama, ahanta east district, western region, Ghana. Am now 20 years of age.

HOW I BECAME AN ORPHAN.
I was living happily with my parents happily when all of a sudden things changed. I first lost my father. I was then just 8 years old.  He was a fisherman and so he used to fish. One sad day, he went fishing and according to the news they brought, my father went drowning in the sea. That was in 2002. Till this date his body has never been seen or found. The next year my mother also died but she was always on my education since I am the only boy. After the death of my father, we left Shama to Dixcove, still in western region. There I was no more interested in going to school because things were difficult
for us. My mother was the only one catering for us so it became a pressure on her. My mother saw something in me and that pushed her to send me to school. She believed that, am the only person who she can invest all her resources for a better result because she saw that I was clever, though stubborn. In her idea, she decided to send me far away from the sea so that I can have a focused mind to study. So she took me out from Dixcove to Egyam. And there I stayed with my uncle’s in-law. It wasnt easy though but God was with me. In 2003, I had to start school and in 7 months time, the news again came that my mother is dead. In fact, I collapsed. At that time, she was the only hope I had. Family members were not even coming in to help. At times, we eat once and at other times, nothing. In the cause of this, we lost our last born. I was in primary five when the news came. So within three years, I lost my parents and a sister. I was about to stop school because financially, it was difficult.
THE GREAT LIGHT.
My light began to shine when I graduated to Primary six. That was when the ORPHANAGE shoot itself. For me, it was beyond my imaginations and understanding. I told them my story together with my guardian and was admitted to the HOUSE OF HOPE. I never dreamt this. Infact, my heart was full of joy. By God’s grace, the orphanage has taken me through my basic and secondary level of education. Am now in the tertiary offering purchasing and supply.

SURGICAL OPERATION
In the year 2010, I had to go through an operation which of cause was not easy. I had to stay in the hospital for some weeks all because of appendix. The pain was unbearable. I was not sleeping day and
nights. my life was fading away. it was one Saturday and I had to be operated. Doctors were saying that they do not operation on that day. Luckily for me, madam Thea was then in Ghana. She saw my pains. She was going through and have to go and beg the doctors for them to do the operation on me. At that point in time, operation was the only solution to save my life. I would say that I would have died without Madam Thea. I think that I owe her my life. Even after begging them, the doctors were not ready to do that. She still went again to beg and finally they came to do the surgical operation. By God’s grace, the operation was successful and I now have my life and strength again though not
like before.
APPRECIATION
I want to extend my deepest and warmest appreciation to all our donors and sponsors who have shown interest in the caring of EGYAM CHILDREN’S HOME. I know for sure that what you are doing is seen by the Creator of Heaven and Earth and He will visit you in your various destinations. I know you are fulfilling the scriptures and that God will fulfill all His purposes for your lives. On behalf of the Director, the staff and the children of the home, I say a big thank you and God richly bless you.

MY GOALS
My greatest goal in life is to study hard, be the person I want to be and also stretch out my hand to help vulnerable and needy persons and children to be able to also see their lights. When I somthings see children and other persons on the street selling, I do become sad, and I always pray to God, for their lives. I know for sure that I will be able to help those people in future with God being my best friend, I shall go far.